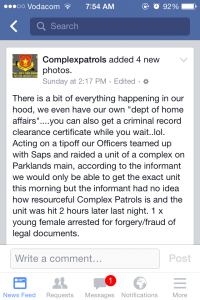 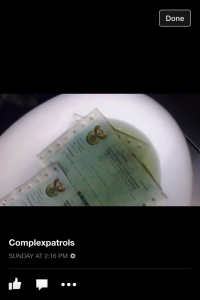 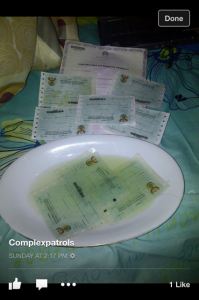 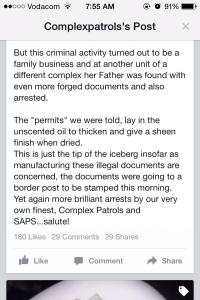 Acting on a tipoff officers from Complex Patrols teamed up with SAPS and raided a unit of a complex on Parklands Main, according to the informant we would only be able to get the exact unit this morning but the informant had no idea how resourceful Complex Patrols are and the unit was hit 2 hours later. One young female arrested for forgery/fraud of legal documents. This activity turned out to be a family business as the females father was found with even more forged documents and he was also arrested. The “permits” we were told, lay in the unscented oil to thicken and give a sheen finish when dried. This is just the tip of the iceberg insofar as manufacturing these illegal documents are concerned, the documents were going to a border post to be stamped this morning! Well done SAPS and Complex Patrols. – information from messages from Complexpatrols.  WE SUPPORT ANTICORRUPTION @RELOAFRICA #ANITCORRUPTION 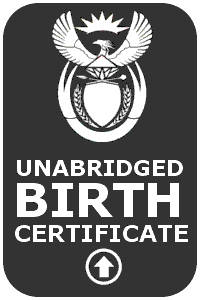 Please be advised of the following relating to children under the age of 18 entering and departing South African Ports of Entries.

As of 01 June 2015 children must be in possession of their birth certificates which must reflect both parents’ names (unabridged birth certificates) – if in a foreign language, it must be accompanied by a sworn official English translation.

Children travelling with one parent, must be in possession of their birth certificates which must reflect both parents names, an affidavit from the absent parent (the affidavit must be less than 3 months old, on the day of travelling), authorising the child to travel, a court order granting full parental responsibilities or legal guardianship or the death certificate of the absent parent.

Children travelling with a person, other than their parents, must be in possession of their birth certificates which must reflect both parents names, an affidavit from the both parents, authorising them to travel with that person (the affidavits must be less than 3 months old, on the day of travelling), together with certified copies of both parents identity documents as well as the contact details of both parents.

Children travelling unaccompanied, must be in possession of their birth certificates which must reflect both parents names, an affidavit from the both parents, authorising them to travel, certified copies of both parents identity documents, contact details of both parents, as well as documentation relating to the person who will be receiving them in SA (a letter stating the persons full names, contact details residential address, certified copy of their identity document or passport and permanent residence certificate – if applicable).

It will be the travellers’ responsibility to ensure that they are in possession of the correct documentation, failing which they will be denied boarding.

Please contact us if you require assistance with procuring unabridged birth certificates. On +27 21 7634240 or info@relocationafrica.co.za

FROM THE HORSE’S MOUTH **

Facts you did not know about Tunisia – officially the Tunisian Republic.
It is the northernmost country in Africa and its name is derived from its capital city, Tunis, located on the country’s northeast coast.

1. How are birthdays celebrated?
It is common to celebrate birthdays at home with family and friends or out at a hotel or restaurant.

2. When you first meet someone, how do you greet them?
If it is for the first time, we shake hands. Otherwise with friends and family we kiss on the cheeks – twice and sometimes four times – we are a tactile nation.

3. What languages are spoken in your country?
Mainly Tunisian Arabic and French, and English at times for official purposes.

4. Do you use a twelve hour clock, or a twenty-four hour clock?
We use the 24-hour clock

6. How important is punctuality?
Punctuality is important to us. People might arrive for parties a little late but never for business meetings.

7. What types of music are popular?
Oriental and Folkloric Who are some of your most popular musicians?
Saber Rebai –  listen
Lotfi Bouchnac – watch and listen

8. Are there any Traditional Dances?
Folkloric – watch

9. What traditional Festivals are celebrated in your community?
Two of the most popular are The International Festival of Carthage and the Kef Chante La Tunisie. The International Festival of Carthage is the longest-running festival in North Africa, having been established in 1964. This year, the event celebrates its 50th anniversary, which will be celebrated by seven major performances. Besides the acclaimed local and international singers from the variety of jazz, fashion and folk genres, the festival sets the stage for a great selection of ballet and dance shows as well. Set in a refurbished Roman amphitheatre that seats up to 7500 people this is a remarkable open-air summer festival.
Another city boasting a UNESCO World Heritage Site is Dougga, which is believed to be the best-preserved Roman small town in North Africa and is home to Africa’s biggest Roman amphitheatre, built in 168 or 169 CE. This exceptional and architectural heritage is the venue for the acclaimed Dougga International Festival, which is worth visiting for the setting alone. The theatre can seat up to 3,500 people, who can enjoy a distinctive cultural experience and choose from a rich list of classical music and theatre events.

10. What are your seasons like?
It is sunny in the spring, hot in the summer, warm in the autumn and cold in the winter. In summer temperatures can reach up to 40°C and in winter they can fall as low as 5°C. Sometimes you can experience all four seasons in the same day.

12. What are Tunisia’s major industries?
Agriculture and textiles – Agriculture is still the mainstay of the Tunisian economy, although minerals (especially crude oil and phosphates), textiles, and tourism are the leading sources of foreign exchange.

13. How do people spend their free time?
In coffee shops and travelling. Because Tunisia is so close to Europe Tunisians love to travel to Italy, France, Spain and Turkey. Otherwise we love to sit in coffee shops for hours on end.

14. What do people drink?
Coffee, tea, and alcoholic drinks like beer and whiskey

15. What is a popular local dish?
Couscous is Tunisia’s unofficial national dish. But it is more than just a staple food: for many families preparing and eating couscous is a ritual and a tradition that binds the generations together. The basic ingredient in couscous dishes is semolina. This is mixed with water and rolled, originally by hand, to make small grains of various grades. These grains are then steamed over a boiling sauce in a two-chambered pot called a keskes. Once the couscous grains are fluffy and the sauce is cooked, the two are mixed together and served, often with meat or grilled fish on top.
The king of Tunisian cuisine, however, is undoubtedly ojja, the spicy tomato-based stew common to nearly every working-class Tunisian restaurant. The dish is very saucy, with a rich, spicy flavor. The base consists of tomato paste, garlic, green peppers, coriander, cumin, and a healthy dollop of harrisa, the delicious hot pepper paste found in a majority of Tunisian dishes. The ojja is a deep red colour, with two very runny eggs on top.

17. General Security? It is generally calm and secure. We did, however, recently suffer a very unfortunate and unexpected terrorist attack at the Bardo Museum in Tunis.

** Meaning: From the highest authority. From the source. Origin: In horse racing circles tips on which horse is a likely winner circulate amongst punters. The most trusted authorities are considered to be those in closest touch with the recent form of the horse, that is, stable lads, trainers etc. The notional ‘from the horse’s mouth’ is supposed to indicate one step better than even that inner circle, that is, the horse itself

For companies to compete for talent, they need to be aware of what the market is paying for certain skills and then develop reasonable salary ranges within their organisation.

Salary benchmarking can be time consuming and costly but it is necessary to improve an organisation’s ability to attract talent and motivate and retain existing employees. Some companies have remuneration departments to assist with benchmarking and they often have access to salary surveys.

If your organisation is paying for a salary survey or considering a survey, look out for the following:

Participants – the companies compared in the survey should be from a similar industry, company size and location to yours.

Data – look for similar job titles and compare the responsibilities. The data must be current and valid (look for dates and ensure that the sample data is large enough).

If your company does not have access to a remuneration department, would like to benchmark a few roles or has a unique role which is difficult to compare in the market, follow these basic steps to create your own benchmark:

Position your salaries relative to competitors and decide where your company wants to pay in relation to market rate.

This article was written by Lara @ www.360hr.co.za.  Relocation Africa offer comprehensive data such as Housing Data, and Cost of Living Data for Africa, we also offer International Payroll Administration for Multinationals, and Payment Services.  Email Andrew@relocationafrica.com for additional information.