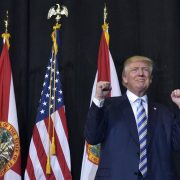 The Republican nominee, Donald Trump has sensationally won the White House as the next President of the United States of America and democratically elected Leader of the Free World. But what, if anything, does this mean for South Africa?

US Consul General of the United States in South Africa, Teddy Taylor recently advised that there is no reason to expect any changes in the US’ relationship with Southern Africa.“People change, but our institutions remain the same. Our institutions will survive the results of the elections,”said Taylor. According to Taylor, US foreign policy is (currently) geared to strengthen governance and institutions of governance to enhance trade and create jobs

A key question would therefore be the extent to which Obama’s successor will deviate from the present trajectory of US foreign policy.

In this regard, the economic policy which has strongly been advocated by President-Elect Donald Trump to date, has been very isolationist. During his campaign, Trump indicated multiple times that should he win, harsher trade restrictions will be put in place with emerging markets such as Mexico and China – thereby creating more job opportunities for Americans.

In addition, on the topic of South Africa, Trump stated during his campaign:“South Africa is a total and very dangerous mess”. Trump also expressed his views on South Africa upon the passing of former-president Nelson Mandela: “I really like Nelson Mandela but South Africa is a crime ridden mess that is just waiting to explode – not a good situation for the people”.Trump has also during his campaign been less engaged on international trade, foreign aid and providing multilateral solutions to international problems such as climate change. It is therefore likely that Trump will be loathe to engage with South Africa during his tenure as President.

What would this mean for South Africa? The African Growth and Opportunity Act (AGOA) is a United States Trade Act, enacted on 18 May 2000. This Act seeks to provide assistance to African economies and to facilitate bilateral trade between Africa and the US through the provision of, for example, tax free exports from African countries to the US.

Foreigners hurt in fight over bribes
Scroll to top