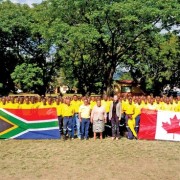 The firefighters were brought to Alberta, a province of Canada, to fight what is known as the Fort McMurray blaze, which had been spiraling out of control late May.

The contract was negotiated by the Canadian Interagency Forest Fire Center (CIFFC) and Working on Fire, a South African government program. As a result of the contract, the provincial government in Alberta agreed to pay $170 Canadian dollars per firefighter per day to the program (all dollar amounts in this article are Canadian – it is about R12 to $1).

Acquiring ID a challenge for disabled girl Her family says she has been sent...
Scroll to top