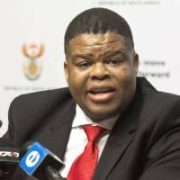 Arthur Fraser is the new Director General and Accounting Officer of the State Security Agency (SSA). His appointment was announced on Monday by State Security Minister David Mahlobo.

Making the announcement‚ Minister Mahlobo expressed full confidence in Fraser. “We believe Mr Fraser is equal to the task and will provide the necessary leadership that will ensure the Agency is able to deliver on its constitutional and legal mandate of upholding national security.”

Fraser was quoted in the Ministry statement as saying he appreciated the confidence shown in him and said he was committed to “working with the Ministry and the entire membership of the Agency to deliver on the mandate”.

The Ministry statement noted: “Mr Fraser is not new in the intelligence community‚ having served in various operational capacities that culminated in his appointment as the DDG: Operations in the former National Intelligence Agency (NIA). He also served as a DDG in the Department of Home Affairs responsible for Immigration Services. He brings with him immense understanding and knowledge of the intelligence environment and his astute managerial experience which will help move the organization forward.”

Fraser was once regarded as a supporter of former president Thabo Mbeki when he was head of the NIA’s powerful operations division.

The M& G reported in 2009 that he had “saved” President Jacob Zuma’s political life when he allegedly leaked to Zuma’s lawyers the secret recordings that let him off the hook on corruption charges.

In late April 2016‚ however‚ the High Court in Pretoria set aside the prosecuting authority’s decision to drop corruption charges against Zuma.

Current National Director of Public Prosecutions (NDPP)‚ Shaun Abrahams‚ has the responsibility of deciding whether to proceed with a prosecution.