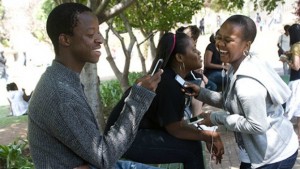 Nationally, South African Internet users spend 24.7 percent of their income on mobile services including data and voice, according to a Fin24 report.

Anything more than 5 percent in unaffordable, according to the International Telecommunication Union, said Alan Winde, minister of economic opportunities in the Western Cape.

The South African average monthly spend on a cellphone for voice and data is 210 rand ($13.06) per month, according to an Oct. 19 2015 BusinessTech report.

It’s worse in Malawi, where citizens spend more than $12 a month on average for mobile phones — that’s more than 50 percent of what an ordinary Malawian earns in a month, BBC reported in February 2015.

The universities of Cape Town and Western Cape conducted research commissioned by the provincial Western Cape Department of Economic Development and Tourism.