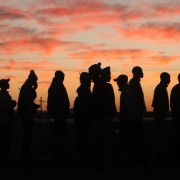 More people lost their jobs in South Africa the first quarter of the year, latest figures have revealed and this is likely to put pressure on the ruling ANC ahead of August’s local elections.

According to the country’s Quarterly Employment Survey released on Monday, 15 000 were lost.

The Confederation of South African Trade Unions (COSATU) said while it was not surprised by what it called a “bloodbath”, there was need for a “jobs summit”.

We think it is going to get worse

“We need an emergency job summit to really reflect what this means for the economy going forward, we need a unique South African development model and look at what is wrong with our economy and how we can all work together,” COSATU’s Sizwe Pamla said, adding they were “no longer shocked” by such statistics.

“We need to stop jobs bloodbath. We are not going to have solution to the job losses if we go back to our own corners and the government is simply playing a neutral role.”

Pamla said the labour organisation wanted the government to be more decisive in dealing with unemployment.

“We think it is going to get worse, people are just not applying their minds on what is needed in the country,” he said.

Statistician-General, Pali Lehohla’s latest figures showed that the largest percentage of job losses was in the retail, hotel and restaurant sector.