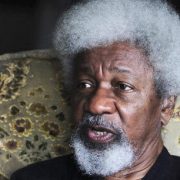 Nigerian Nobel-literature laureate Wole Soyinka has confirmed that he has relocated to his native Nigeria. The move is in line with his pledge to leave the United States if Donald Trump won the US elections.

The infamous decision to rip apart his green card made the headlines before and after the November 8 polls that Trump won beating Hillary Clinton, his main contender.

A green card simply is a document that identifies the bearer as an alien with permanent resident status in the United States.

The 82-year-old told AFP on the sidelines of an education conference at the University of Johannesburg, South Africa: “I have already done it, I have disengaged (from the United States). I have done what I said I would do.

“I had a horror of what is to come with Trump… I threw away the (green) card, and I have relocated, and I’m back to where I have always been. It’s useful in many ways. I wouldn’t for one single moment discourage any Nigerians or anybody from acquiring a green card… but I have had enough of it,” he said.

Brief: Who is Wole Soyinka?

Full name, Akinwande Oluwole “Wole” Babatunde Soyinka, the prolific playwright, novelist and poet won the Nobel Prize for Literature in 1986 and has been a regular teacher at US universities including Harvard, Cornell and Yale.

Soyinka is one of Africa’s most famous writers and rights activists, he was jailed in 1967 for 22 months during Nigeria’s civil war.

He was reported to have recently completed a term as scholar-in-residence at New York University’s Institute of African American Affairs.

What exactly Soyinka said before the US elections

He was addressing students of Oxford University in the UK, Soyinka said it was unlikely that Trump would win but if he did then he will cut up the green card which allows him to stay in the US.

“If in the unlikely event he does win, the first thing he’ll do is to say [that] all green-card holders must reapply to come back into the US. Well, I’m not waiting for that. The moment they announce his victory, I will cut my green card myself and start packing up,” said Soyinka.

Soyinka was the first African to be awarded the Nobel Prize in Literature, in 1986.

After Trump win, he was reported to have said

“Why don’t we wait until Trump actually takes office? I am just going about my normal commitments, but definitely not getting into any more commitments. Let’s put it that way for now”.