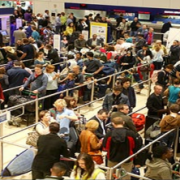 The Department of Home Affairs must suspend of biometric capturing at South Africa’s airports for the duration of the peak season, said the Board of Airline Representatives South Africa (Barsa).

A shortage of trained immigration officials capable of capturing biometrics is leading to lengthy delays for international travellers, even causing them to miss connecting flights.

“The decision by the Department of Home Affairs not to employ additional immigration staff due to budget constraints will need to be re-assessed before December,” said June Crawford, Barsa CEO. She adds that a new shift system has compounded the problems. “The DHA has taken the decision to revert to a 12-hour, four-group system because they can no longer afford transport for their officials.”

Crawford said Barsa would continue to seek ways through various stakeholders to find a solution to this ongoing problem. “The tourism industry is under duress during the busiest time of the year. In our view, the suspension of biometrics until after the peak season would be a short-term solution allowing for all parties to discuss the best way forward.”

Craig van Rooyen, Director of Tour d’Afrique, said he expected travel during the December period to be “majorly” affected by long queues at the airport and says the company has advised its international agents to allow a longer period between connections, working on three hours instead of two.