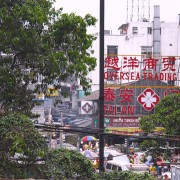 Guangzhou, ChinaThe heart of Little Africa — or Chocolate City, as it has been dubbed by some — is not easy to locate without a tip-off.

At the foot of an unremarkable tunnel, peeling off the busy Little North Road, in Guangzhou, stands a place that just two years ago was totally unlike the rest of China.
Angolan women carried bin bags of shopping on their heads, Somali men in long robes peddled currency exchange, Uygur restaurateurs slaughtered lamb on the street, Congolese merchants ordered wholesale underwear from Chinese-run shops, Nigerian men hit the Africa Bar for a Tsingtao and plate of jollof rice.
Dengfeng — a previously quiet urban village, or chengzhongcun, in central Guangzhou — had been electrified by migration, both from internal Chinese migrants and those from Africa.
By 2012, as many as 100,000 Sub-Saharan Africans had flocked to Guangzhou, according to Professor Adams Bodomo’s book “Africans in China” — if true, it would have been the largest African expat community in Asia — all chasing the same dream of getting rich in China.
Today, that dream is fading — if not finished.
Source
Jun 28, 2016/by Andrew Stegmann
https://www.relocationafrica.com/wp-content/uploads/2016/06/africans-in-china.jpg 619 1100 Andrew Stegmann https://www.relocationafrica.com/wp-content/uploads/2020/09/relocationafricagroup.jpg Andrew Stegmann2016-06-28 09:18:052016-06-28 09:18:05The African migrants giving up on the Chinese dream
Here Is How African Markets Reacted To Brexit