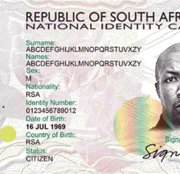 ALMOST 208 000 newly-issued identity documents (IDs) are gathering dust at Home Affairs offices across the country, as applicants are failing to collect them. Of the 208 000 IDs, 168 000 are smart cards, which will replace the green ID book. Statistics about uncollected IDs were revealed by Home Affairs Minister Malusi Gigaba at the handover of the revamped Ratlou Home Affairs office in Thaba Nchu last Wednesday (13/07). The premises was renovated as part of broader plans to bring government services closer to the people of Thaba Nchu and neighbouring areas.

Gigaba has raised concerns that IDs gathering dust at Home Affairs premises countrywide will be needed by voters for the upcoming local government election on 3 August and has urged applicants to collect their IDs ahead of the upcoming local elections.

He said uncollected IDs were mostly in remote regions with a high indigent list. He said local municipalities would be roped in to provide IDs to residents on the indigent list, with free transport to Home Affairs offices in rural areas.