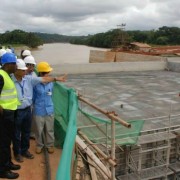 The buzz in the town of Edea is the near $1 billion in investment expected to arrive soon.

An accompanying 40-mile transmission line will transport the energy produced to the main grid in Yaoundé. The plant enables a five-fold increase in the country’s aluminum production for the state-owned company in Edea and, with 420 megawatts of electricity expected by 2019, adds significantly to the country’s power generation, which is barely above 1,000 megawatts today.

Power production, transportation and sales were liberalized in 2001 in Cameroon with the privatization of the state-owned power utility SONEL under a 20-year concession. SONEL—renamed ENEO Cameroun S.A. in 2014—monopolizes transmission and distribution, purchasing electricity from private producers through power purchase agreements with explicit governmental licenses and controls for private commercial producers.

Some Cameroonian locals are still hesitant to celebrate until the project is complete. Barriers, challenges, and setbacks are the usual story in this region.

Sub-Saharan Africa, with a combined population of nearly 1 billion, produces approximately the same amount of power as Spain, population 45 million. Power consumption, slightly over 120 kilowatt hours per capita per year, is only a tenth of that found elsewhere in the developing world and barely enough to power one 75-watt light bulb per person for four hours a day. All these statistics highlight the opportunity to power Africa.