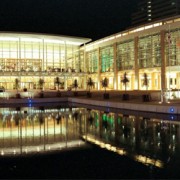 Conferencing in the Western Cape is off to a good start in 2016, with two bids worth almost R2 billion (€118 million) secured.

According to Tim Harris, CEO of Wesgro, the official destination marketing, investment and trade promotion agency for the province, the World Ophthalmology Congress will take place at the CTICC in 2020 and the International Fiscal Association in 2022.
3a4370a08edf99b13c8de3cff320adc5
“These two conferences combined will bring a total of 16300 delegates to the province generating some R262 million (€15 million) for the economy.”
Harris said conferencing and events was an increased focus of the organisation that had a dedicated conferencing team who were tasked with promoting Cape Town and the Western Cape to the world.

Harris said business confidence in Cape Town in particular was growing and it was being seen as a world-class conferencing destination.