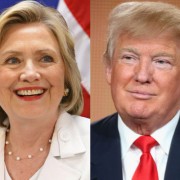 Hillary Clinton and Donald Trump have different stands on different agendas. However, it is crystal clear that the two will fight to ensure America’s interests are put forward in Africa, regardless of how those interest might affect the continent.
By now, the world knows that the US presidential election will be highly dominated by the former Secretary of State Hillary Clinton and billionaire Donald Trump who will possibly play with Democrats and Republicans cards respectively.

Of the two candidates, not much can be said of Trump as a leader, because he has no political experience. But when it comes to matters controversy, Trump has it all. If he is not discussing how the US will build a wall on the border with Mexico to cut the flow of illegal immigrants from Latin America, he is campaigning for limiting the number of Muslims allowed into the country.

Trump, who is known for his blatant unapologetic-ignorance and racism which sparks controversy across the world was earlier discussed here as a leader who would among other things help to make Africa great or great again.