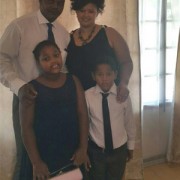 Durban – The thought of kissing his wife and two children goodbye as the expiry date of his temporary spousal visa drew nearer had been replaying in Forbes Maupa’s mind over and over.

Maupa, a priest at Pinetown’s Anglican Church of St John the Baptist, has been struggling to fall asleep thinking about Saturday, August 20, the day he would have to turn his back and bid farewell to South Africa, a place he has called home since arriving from Zimbabwe in 2001.

Desperate and out of options after being given the runaround by the Department of Home Affairs for almost four years on his application for permanent residency, in 2015 Maupa sent Home Affairs Minister Malusi Gigaba a tweet stating his case, hoping that Gigaba would be able to expedite the matter.

However, Maupa struggled to secure his permit despite the minister pointing him in the right direction and assigning an official to deal with the case.