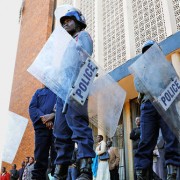 WHEN the presidential motorcade tears through the posh Borrowdale suburb where Robert Mugabe resides in Harare, all traffic still pulls onto the verge in reluctant deference to the despot. At 92 he is plainly bent on staying in power for as long as he lives. But nowadays the vendors hawking newspapers at the roadside, with Zimbabwean flags draped around their shoulders like superhero capes, are selling a different story. “Writing on the wall for Mugabe,” blares one independent newspaper’s headline. In the past few weeks a string of setbacks for the old man has increased the chances that his luck may finally be running out, even before he dies.

The most striking development is the sudden rise of a protest movement led by a previously unknown clergyman, Evan Mawarire, whose hashtag #ThisFlag has caught the nation’s imagination. His campaign, bolstered by the clever use of social media, has drawn support from churches and the middle class which had hitherto tended to steer clear of street politics. When Mr Mawarire, whose trademark is the Zimbabwean flag wrapped around himself, was arrested earlier this month, a large crowd, including many lawyers, converged on the court-house where he was being held, until he was freed amid triumphant cheers the next day. (More recently Mr Mawarire has found it wiser to stay in neighbouring South Africa.)