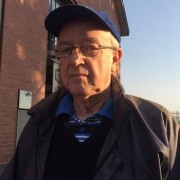 Durban – The 75-year-old voter who was turned away from the voting station at George Campbell Technical School in Durban on Wednesday morning after the system reflected that he was deceased, must urgently approach the Department of Home Affairs, the IEC said.

Friedrich Roggenkamp had registered to vote on the last registration weekend at the same station and has voted several times.

“I have always voted, look at all my stickers,” he said, pointing to other registration marks in his ID book.

Roggenkamp said that, come the next elections, he would probably not vote and intended returning to his home country of Germany, after living in South Africa for almost 30 years.