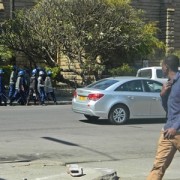 Harare – Protests against President Robert Mugabe’s policies are on the rise in Zimbabwe, with shops and other businesses being forced to close down on Wednesday after police battles against demonstrators seeking to petition parliament and treasury against the currency and loss of jobs.

The protest action on Wednesday was the latest to disrupt economic activity and business operations after mass stay aways in June forced companies to close down.

On Wednesday, the #tajamuka pressure group and #thisgown grouping of unemployed graduates protested around Harare’s business district. But the peaceful nature of the protests was short-lived after police broke up the marchers as they approached parliament, firing teargas and beating up everyone around.

“Things are now out of hand and we have had to close down; looting could start and our equipment and property can get damaged,” said a waitress at a restaurant in central Harare.

Other businesses that had to close down include petrol filling stations such as Puma and Total Zimbabwe. The protestors grabbed chairs and empty crates as well as debris such as stones and bricks and hit back at the police.