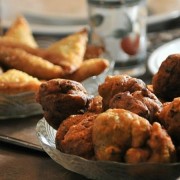 As a multi-cultural society, South Africa doesn’t have a national cuisine as such. Instead, its culinary traditions are as varied as its diverse population. One of the most flavorful and influence-rich of all of these is Cape Malay food.

Cape Malay people – most of whom live in and around Cape Town – trace their history back to the settlement of the Cape in the 17th century by the Dutch, who established a station in Cape Town to service traders travelling between Europe and Asia. Following this establishment, the Dutch starting bringing slaves to the post from Asia and Africa – from Indonesia, Malaysia, Sri Lanka and Madagascar. Cape Malay people are descendants of these slaves, who became emancipated in the early 19th century and settled in the area of Bo-Kaap, in what is now central Cape Town.

The slaves brought with them recipes from home and incorporated the ingredients being transported across the spice routes by the Dutch East India Company, such as cardamom, cumin, turmeric, coriander, fennel, cinnamon and aniseed, as well as tamarind, ginger, bay leaf, curry leaves, garlic and rosewater. The women worked in Dutch kitchens and incorporated many traditional Dutch recipes into their repertoire, and also added some influences from the French Huguenots. The result of this melting pot of influences is a fabulous fusion cuisine full of fragrant spices and subtle flavors that today forms a cornerstone of Cape Malay culture.